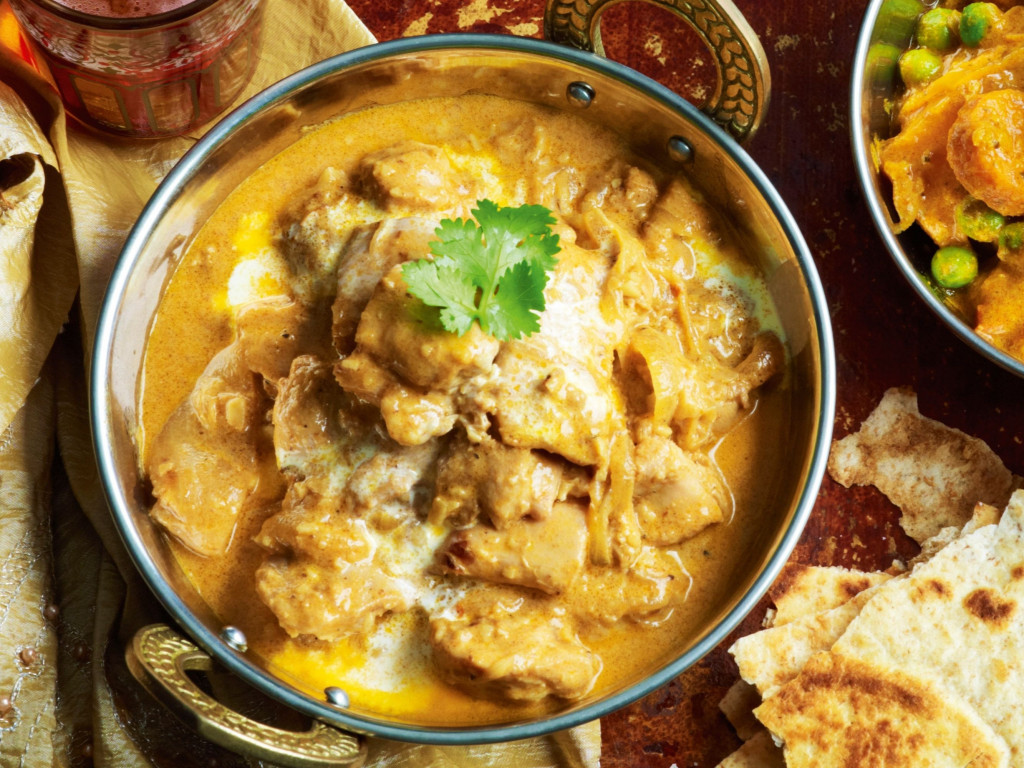 Korma was created in the royal kitchen of the Rajput king Akbar during the middle of the sixteenth century, CE. It is a characteristic Mughul dish, which can be traced to their incursions into present-day Northern India, Pakistan and Bangladesh. The Rajputs were the then feudal rulers of this part of India and incorporated the Persian inspired dish into their cuisine.

Historically it seems that the most likely ingredients were mutton or goat, yogurt, cardamom, black peppercorn, dried ginger and a lot of saffron. Almonds or cashews were soaked in water overnight, peeled and ground, then added to give it a thick creamy texture. There is no turmeric, as it was rarely used in the royal kitchen due to its humble associations.

Using chicken for this dish is a relatively recent innovation from the nineteenth century. When this recipe was created Indian chicken was tough, dry and stringy, unlike the product we are used to today and did not lend itself to this recipe. Vegetable versions were adopted much earlier, almost at the same time as the original recipe. Navrattan korma is a spectacular example of a vegetable korma. It is not just par-boiled vegetables in a korma sauce but is a quite complex recipe. A true navrattan korma is a delight. Hard work, but a delight.

There are several different korma approaches.

In the modern north Indian korma, vegetables or meats are simmered in the sauce, which may be based on heavy whipping cream, condensed milk or yoghurt. This produces a dish with a lot of rich sauce, quite the opposite of the more traditional braising approach described above. The term Malai korma refers to a cream-based preparation and Khoya korma refers to a condensed milk korma. In this north Indian style, the mild, creamy sauce has subtle aromatic spices such as cardamom cloves and cinnamon. Robust spices such as chillies and black pepper are avoided. This type of korma is common in the Punjab, Pakistan and the northern states.

A south Indian korma is different. It is a much more spiced dish and is somewhat simpler in its preparation. Instead of dairy products, it uses coconut milk and includes chilli and black pepper. The common aromatic spices used are fennel seeds and sometimes fenugreek in seed form and in leaves. Tomatoes are often used. The simmering technique is commonly used for this recipe. With a north Indian korma you would expect a mild dish, whilst a South Indian korma can be quite hot.

A korma from the far north of India goes by several names, including Mughlai korma, Kashmiri korma, or Shahi korma (meaning royal korma). These are much more complex dishes and feature nuts and dried fruit. Often they will use cream as the base for the sauce, or even sour cream.

You may find that crème fraiche is a better choice than sour cream. It has a less tart taste and has a different fat percentage to sour cream making it better for cooking. It more resembles the soured cream available in India.

The nuts are used whole and ground. The ground nuts are used to thicken the sauce and are usually almonds or cashews. The whole nuts are almonds, cashews and pistachios. Aside from the spices mentioned above for the north Indian korma, mace, nutmeg and aniseed are often used to increase the aromatic nature of the dish.

I mentioned navrattan korma before. Navrattan korma is a vegetable dish and fits into the shahi, or royal category mentioned above. It dates back to the Akbar reign. In Hindi, navrattan means “nine gems”, with several theories about which nine gems are being referred to. It may be the nine spices used, the nine fruits and nuts used, or the nine vegetables used. An interesting aside on the vegetables – it is worth remembering that chilli, potatoes, tomatoes and cauliflower are not native to India. At the time of this recipe, they had just been introduced and were only really available in the Portuguese settlements. The likely nine vegetables would have included beetroot, fennel and several different types of leafy green vegetables.

Here are our favourite korma recipes. 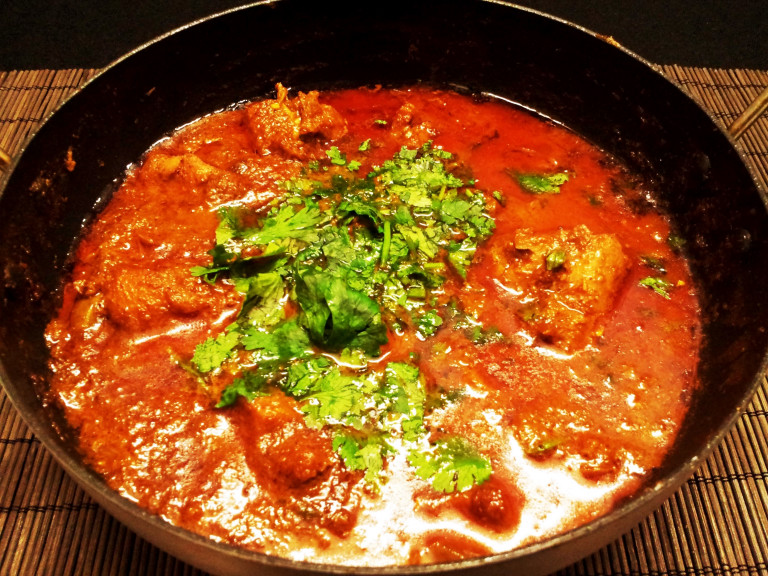 A hotter and spicier chicken korma than the northern style. Kozhi kurma is from the Andhra region of south India. It features coconut milk rather than dairy products. 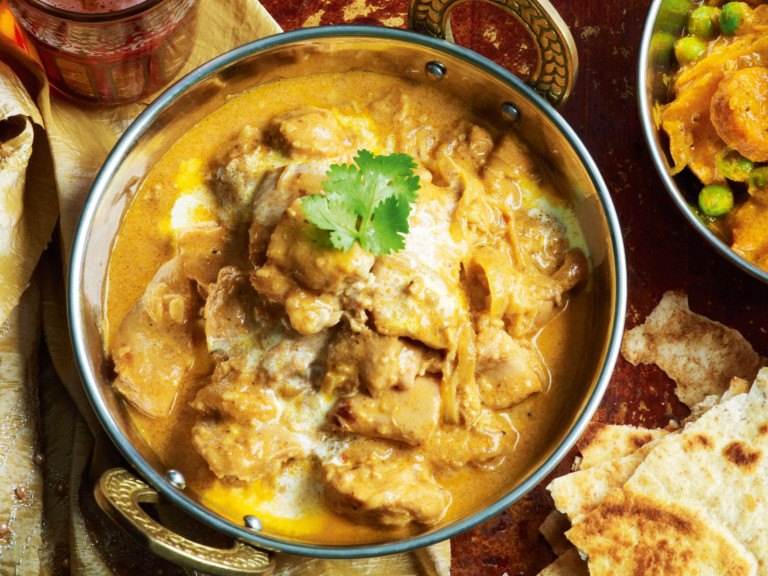 This chicken korma, or murgh kurma is the definitive Mughal recipe - a mildly spiced, delicate and elegant dish. 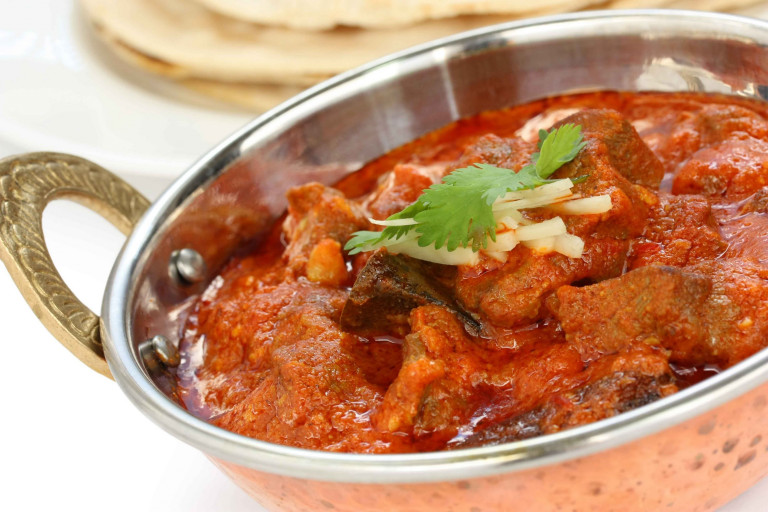 This lamb korma recipe epitomises all that is special about Mughal cuisine. Korma bahadur shahi is mild, with aromatic spices, creamy texture, dried fruit, nuts and the main ingredient highlighted to perfection. 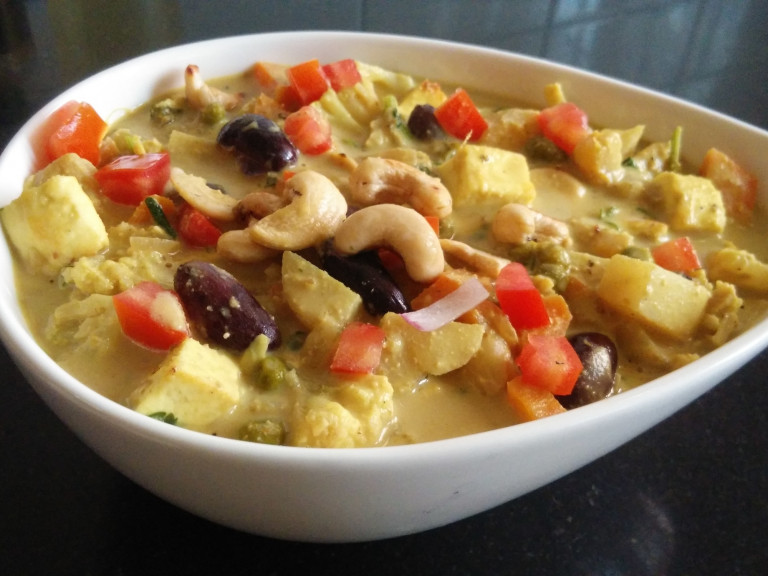 Vegetable korma is aromatic, flavourful vegetarian dish from the kitchens of the Mughal emperor Akbar. This dish, shahi navratan korma, is an exemplar of Mughlai cuisine. 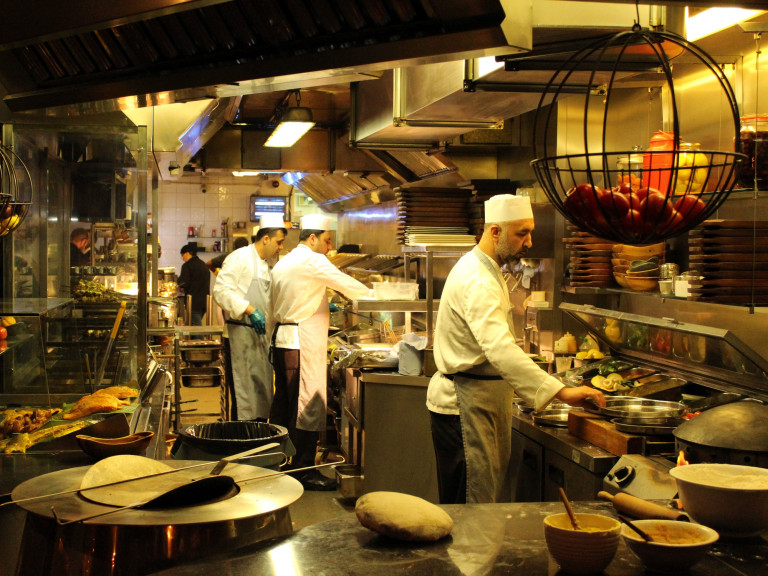 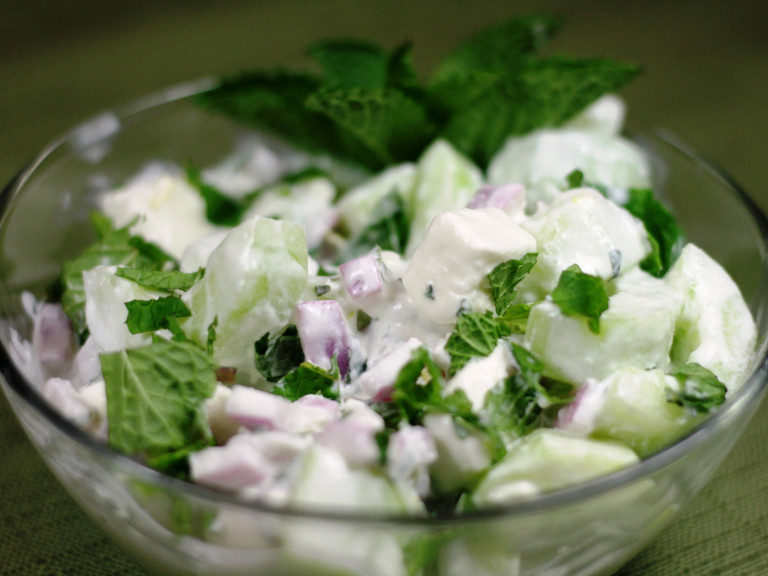