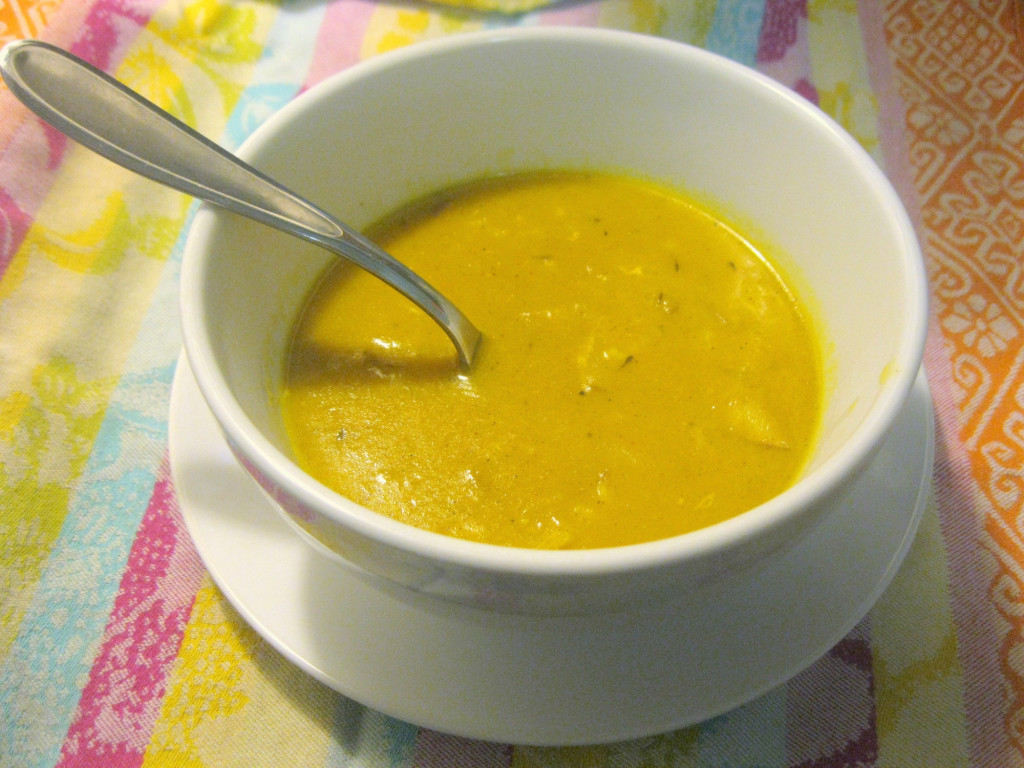 Mulligatawny, or mullagatanni, is lightly spiced, filling soup. It is one of the most recognised dishes in Raj cuisine. The name apparently derives from a corruption of milagu tannir, or pepper water, a common rasam.

Rasam is a broth served with rice in a traditional south Indian meal. Whilst this dish is somewhat thicker than the typical rasam, its heritage from rasam seems quite clear. Unfamiliar with the soup course their masters seemed to need with every meal, Indian cooks served the nearest thing to it that they knew, bulking it out to suit the extravagant tastes of the British. This version is a typical Indian dish, prepared to suit the tastes of the British colonists. Records of this recipe go back to the early nineteenth century CE.

There are several distinct types of this dish in my grandmother’s notes. As with so many of the recipes in this book, it is hard to find a definitive version. The recipe presented here is the one I recall having the most often.

Two of the variations use chicken and lamb. In the chicken version, you use some chicken legs with meat and other chicken bones. Using a pressure cooker, make one litre of stock. This is then strained, then the meat is separated to add just before serving. The lamb version is similar but uses lamb or mutton. One of our favourites is to make the stock using one litre of water with two or three forequarter lamb chops. Again, you strain it, remove the meat to be added just before serving. For these variations, the stock preparation time is around 25 minutes in the pressure cooker.

Some mulligatawny is made without coconut milk and occasionally cow’s milk is substituted. We prefer using coconut milk. Without any milk, it becomes more like a traditional rasam.

In some versions, the rice is added, uncooked, at the start of the process and forms part of the soup. We prefer to put cooked rice at the bottom of the bowl and pour the soup over it. Or, you could serve the rice on the side, or even leave it out. You could serve this with idli instead of rice. If you wanted to pretend you are eating like the Raj, serve it with dinner rolls.

One of the things the Raj loved was large joints of roast meat. Consequently, there was often too much food and leftovers abounded. Using leftover food is an anathema to most Hindus, yet the memsahib was insistent upon its use. You can take mulligatawny to a new level by judicious use of the leftover roast dinner from last night.

Cut the leftover roast meat into 1cm cubes. You will need about 400g of meat, then put that into the soup when you add the coconut milk to allow it warm through. Instead of rice, use the leftover roast vegetables – roast potato works really well in this way – and pour the hot soup over it. The heat of the soup will quickly bring the vegetables up to temperature. This is the classic Raj mulligatawny that many people know.

If you are going to try this variant, there are a couple of other things the British did once they were back in the UK that you might consider.

The first is that they used curry powder, not rasam masala. Given that they probably couldn’t source either the masala itself or the ingredients, this was a good compromise and surprisingly it works well. The second thing they did was add fruit to the recipe. At the time you add the coconut milk, add another diced apple, a handful of sultanas and a tablespoon of lemon juice. This gives a distinct sweet and sour dimension to the dish. Perhaps not to everyone’s taste, but that is the flavour that has become synonymous with this dish, at least in curry houses.

The version presented below is the simple vegetable mulligatawny served over rice. Comfort food. 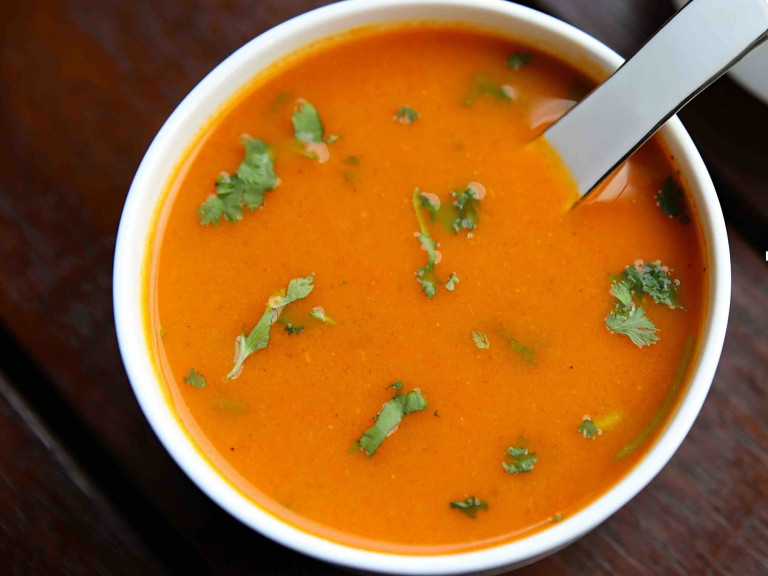 Warm up a winter evening with a bowl of freshly made tamatar ka shorba, a spicy and flavoursome tomato soup from the Mughal cuisine. 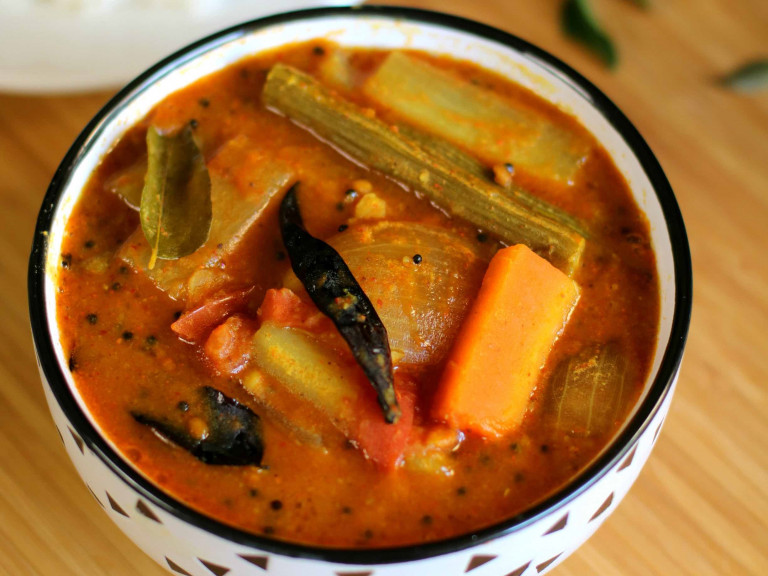 Sambar is a dish from the tradition of lentil-based vegetable soups from southern India. This is our family recipe for a simple vegetable sambar, or sabzi sambar. 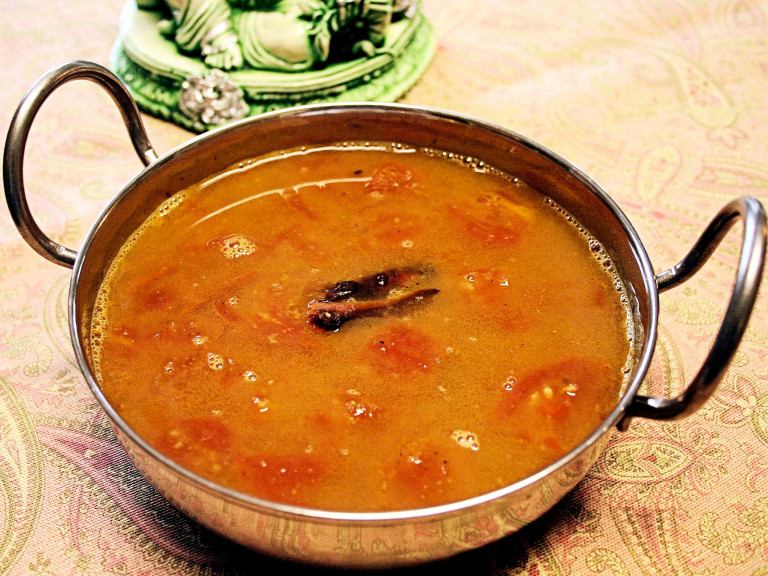 Rasam is thin lentil soup with tamarind and chopped tomatoes, a traditional spice powder, and a simple seasoning of tempered oil with mustard seeds and curry leaves